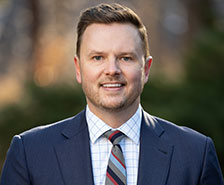 Prior to joining Syracuse University, Jeff served as Vice President at Fleishman Hillard, one of the world’s leading communications firm. There, he provided strategic guidance, media relations expertise, crisis counsel and communications support to a variety of clients in the education, consumer, technology and healthcare sectors. His work earned top-tier media coverage for a variety of organizations including Harvard University, Babson College, Bose, Panasonic and Massachusetts General Hospital.

Jeff draws on nearly 13 years of experience as a journalist in cities across the country from Cheyenne to Boston. Jeff’s reporting resulted in two Emmy Awards, several AP Awards, and he was part of a team that won the prestigious Peabody Award for excellence in their coverage of the tragic school shootings in Newtown, Connecticut.

Jeff grew up in Cazenovia, where his family still lives today, and is a graduate of LeMoyne College.