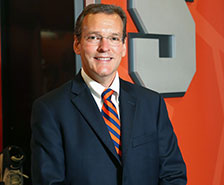 John Wildhack was named Director of Athletics in July 2016, responsible for leading the daily operations of a 20-sport athletics department with more than 550 student-athletes in an environment that coaches, administration and staff foster for student-athletes to maximize their performance in the classroom and on the playing field to prepare them for future success.

A veteran leader at ESPN, Wildhack most recently served as the network’s Executive Vice President for Programming and Production. Wildhack was responsible for oversight of all ESPN and ABC game, event and studio production work for domestic and international television and radio networks, as well as programming acquisitions, rights holder relationship management and scheduling.

During his distinguished career at ESPN, Wildhack held a number of critical leadership roles and was responsible for a number of firsts at the network, including producing ESPN’s first live regular-season college football game in September 1984 and its first live NFL game in August 1987.

A native of Buffalo, New York, and a 1980 alumnus of the S.I. Newhouse School of Public Communications, Wildhack joined ESPN in its first year of operation immediately following his graduation from SU. An active alumnus, he sits on the Advisory Board for the David B. Falk College of Sport and Human Dynamics and was an honoree at the “Newhouse at 40” Gala.