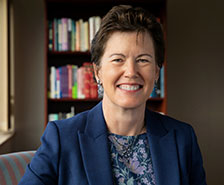 Gretchen Ritter, a leading expert in the history of women’s constitutional rights and contemporary issues concerning democracy and citizenship in American politics, is the Vice Chancellor, Provost and Chief Academic Officer at Syracuse University.

Ritter joined Syracuse University in October 2021. She previously served as the Executive Dean of the College and Arts & Sciences at the Ohio State University. As the chief academic officer for the largest college of arts and sciences in the United States, she was responsible for the academic success and research excellence of more than 17,000 undergraduate students, 2,300 graduate students and 1,300 faculty. The College of Arts & Sciences includes 38 academic departments and schools, more than 20 centers and institutes, and more than 80 major programs. Her accomplishments include restructuring the research portfolio and incentives to return more facility and administrative cost to programs, expanding grant management support and creating a new college-wide research advisory council. She reorganized the office of curriculum development and undergraduate education and secured faculty approval for the university’s new General Education requirements. She also secured the single largest individual donation in the college’s history.

In response to the pandemic, Ritter oversaw the transition of 4,000 courses to remote learning over the course of two weeks. Her diversity and inclusion efforts include leading the development of a university-wide initiative for strategic hiring and retention in Race, Inclusion, and Social Equity (RAISE) initiative, building a diverse college leadership team and chairing the search committee that hired the first African American woman dean for the College of Engineering.

Ritter served as the Harold Tanner Dean of Arts and Sciences at Cornell University from 2013 to 2018, when she returned to the faculty. At Cornell, she provided strategic vision and oversight for 28 departments encompassing more than 500 tenured and tenure-track faculty, serving 5,600 students, with an annual budget of more than $400 million. As dean, she reorganized the admissions and advising office, increased diversity within the undergraduate student body, created new support programs for first-generation students and oversaw the creation of a one-credit advising seminar for first year students. She raised over $230 million in new gifts and commitments over five years, secured an endowment for the Center for the Study of Inequality and established newly endowed professorships, department chair and program director positions. Ritter increased the diversity of faculty and appointed more women and people of color to leadership positions. She increased travel and research funding for humanities faculty, established the Milstein Program in Humanity and Technology and collaborated with the College of Engineering to establish the Cornell Neurotech Program.

Prior to Cornell, Ritter was Vice Provost of Undergraduate Education and Faculty Governance and Director of the Center for Women and Gender Studies at the University of Texas at Austin, where she was also on the faculty of the Government Department.

Ritter earned a bachelor’s degree in government from Cornell University and a Ph.D. in political science from the Massachusetts Institute of Technology.

She has published numerous book chapters, articles and essays. Her monographs include The Constitution as Social Design: Gender and Civic Membership in the American Constitutional Order and Goldbugs and Greenbacks: The Antimonopoly Tradition and the Politics of Finance in America, 1865–1896. She also co-edited Democratization in America: A Comparative and Historical Perspective. She is a frequent reviewer for scholarly publishers and top-tier journals and has served as a peer reviewer for the Social Science Research Council, the National Science Foundation, the National Endowment for the Humanities and the MacArthur Foundation.

Ritter is the recipient of several fellowships and awards, including a National Endowment for Humanities Fellowship, the Radcliffe Research Partnership Award, and a Liberal Arts Fellowship at Harvard Law School.  She is a member of the American Political Science Association and was admitted to the Council on Foreign Relations in 2016.